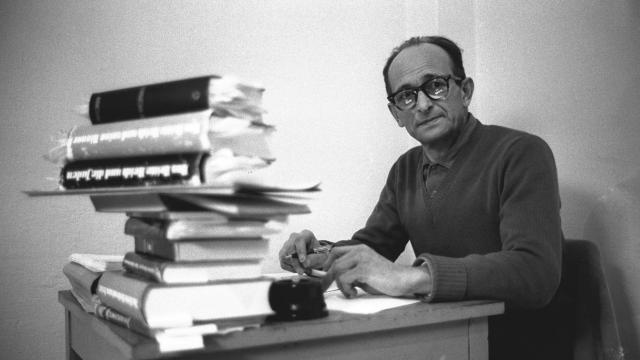 Honourable employee of the slaughterhouse

They first send Polish prisoners to concentration camps. Then it was the turn of the Jews. The men and women in these camps worked hard and received the minimum ration. When they became ill and disabled, they were sent to the “bath”. In these baths, they inhaled toxic gases and died within minutes without consuming a bullet; The corpses were then burned in kilns, the “cleanest” form of slaughter!

Who ran this “clean” system?

“Adolf Eichmann” was a German engineer who designed the “Final Solution” system.

When the Allies besieged Berlin in 1945, Hitler committed suicide, but Hitler did not organize his crimes alone; he was accompanied by a group of “German geniuses”: Goebbels, Goering, and Himmler. These were “geniuses who believed in the leader.” Some of them were tried at the Nuremberg War Crimes Tribunal, but some fled to faraway places like South America and lived in secret for years under false identities. Eichmann was one of them. He was arrested years after the end of the war and sent to Jerusalem.

Prominent researchers have studied the Eichmann case; They were curious to see the mental state of the person who managed the deaths of thousands of innocent people.

One of the most famous people to investigate Eichmann’s case was Hannah Arendt. Hannah Arendt (1906-1975) received her doctorate in philosophy in 1929 under the supervision of Karl Jaspers, a German psychiatrist and philosopher at the University of Heidelberg. After the Nazis came to power, she was captured by the Gestapo for a while but then fled to the United States. She was the first female professor at Princeton University.

Hannah Arendt wrote articles for the journals during Eichmann’s trial, which were later compiled and published in Eichmann in Jerusalem.

The results of research by leading Arendt researchers were:

Eichmann did not have any mental illness. He had no bad memories or grudges against the Poles or the Jews.

Eichmann was a disciplined, law-abiding, conscientious, and “exemplary” person throughout his school and university years!

Eichmann had no personal history of aggression or violence and was known in family and friends as sociable, kind and warm!

Eichmann believed that he had performed his “duties” as a “technocrat”, that the “system” in which he was working had assigned him a “mission” and that he had “engineered” the mission in the best possible way!

In major and systematic crimes, do not look for antisocial personalities, the best students with high grades and discipline scores, make bodies of repression machines, and the narcissistic geniuses of these honourable, conscientious and obedient employees are obliged to “perform their duties”!

Organized and large-scale crimes are committed when “crime” becomes “duty”!

The magic of totalitarian leaders like “Hitler”, “Stalin” and “Mao” is that they turn crime into a task of duty!

Definition of a healthy society